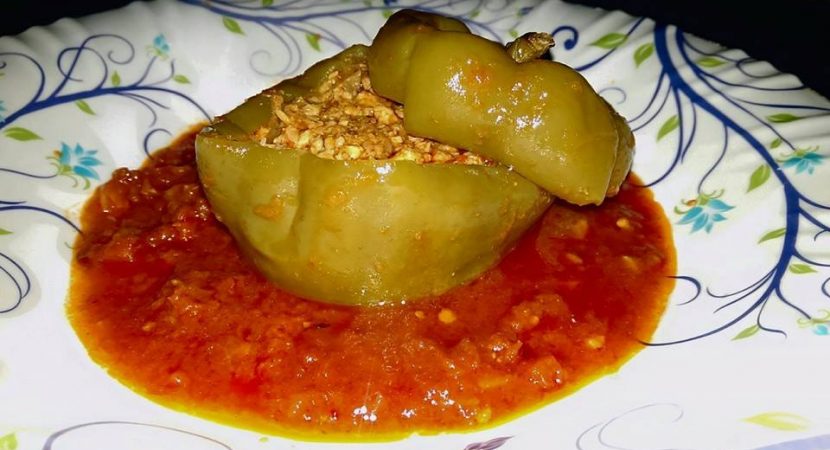 Stuffed peppers exist in various names and structures around the world. It comprises of chime peppers loaded down with cooked meat, potatoes, and onions and prepared with bean stew, turmeric, coriander, cilantro, salt, and lemon juice. People sauté these peppers on a Tava (skillet) or cook in a broiler.

Stuffed Capsicums are juicy and succulent. People love to eat them in rainy seasons and chilled months. In Mumbai, people cook and stuff these capsicums with the boiled rice. Spicy sauces and green bean stew is used as a slide serving with the stuffed capsicums. People in the South, cover the capsicum with flour and fry them. South Indians eat these capsicums with Chutneys and Sauces. In Andhra Pradesh and Tamil Nadu, a portion of the littler however more intense chilies are likewise stuffed and broiled, particularly as a side to rice.

Slice off the tops of the Capsicums. Remove the seeds. Rinse them in water and pat dry with a kitchen towel. Keep aside. In a cooking pan, heat oil. Fry chopped onions. Sauté the onions till translucent. Add Chicken Mince and stir. Then add Ginger/Garlic Paste, Salt, Chili Powder, Chili Flakes, Coriander Powder and Turmeric Powder. Mix well and keep stirring on medium heat until chicken cooks and all water becomes dry. Sprinkle ground coriander seeds, ground cumin seeds, ground funnel seeds and black pepper. Mix it well. Now stuff the capsicums with chicken mince with the help of a table spoon. Cover the capsicum tops and tie them with a thread.

Bake Capsicums in an oven or sauté them on a frying pan. Heat up some oil in a frying pan and put stuffed capsicums in it. Cover the pan properly and reduce the flame to medium low. Check the capsicums after 5 – 6 minutes and keep changing their sides to avoid burning. Cook capsicums until they become soft and their color changes to brownish green. It will take at least 25 minutes on low flame.

samansara
Fiverr
Seller
I have done MBA in Human Resource Management. I am also a Computer Graphics Expert. I have expertise in making Professional Presentations, doing Internet Research, Summarizing Data and Writing Articles and blogs. I also do Professional Voice Over & Video Editing.